These quilters met to make plans for our annual May retreat at Luther Springs in Hawthorne, Florida.
Linda H. attended and sewed too, but she was the photographer! 😀

Our next Sew-In is Saturday, February 24 at 10 am - Belleview Public Library. Hope to see you there!
No comments:

At our January 8 meeting, 10 quilters brought quilts to show for our members to constructively critique, asking: Is This Modern? Every quilt was beautiful in it's own right, so there was no criticism among comments.

Rather, many suggestions were made about how each quilt might be  changed or remade to become more modern. Using the checklist (at right) as a guide, members chimed in to offer a variety of ideas for each quilt. 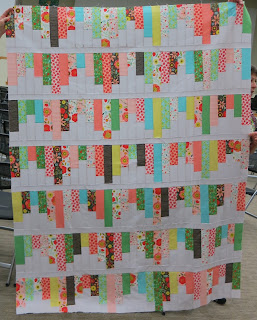 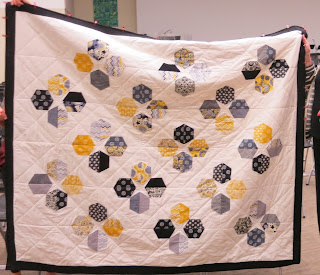 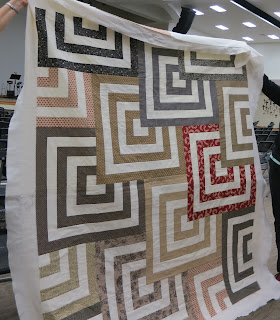 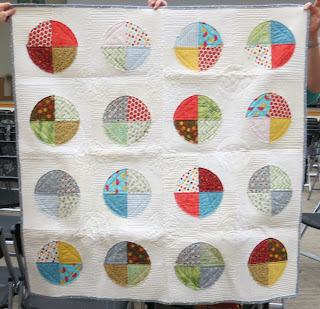 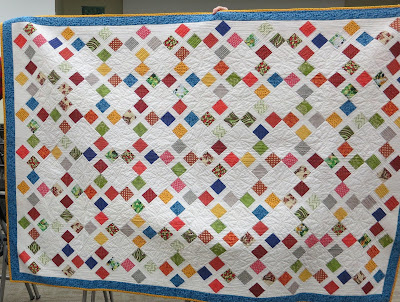 Modern elements: bright, graphic design
Suggested changes: change values from all mediums to a mix of lights and darks; make from solids instead of batiks 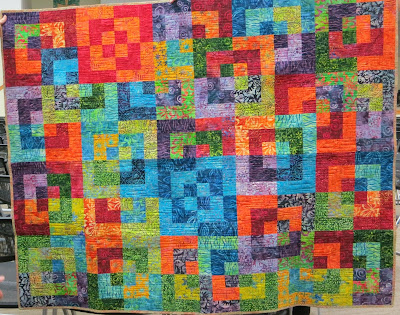 Modern elements: ?
Suggested changes: This is an art quilt made using reverse appliqué. 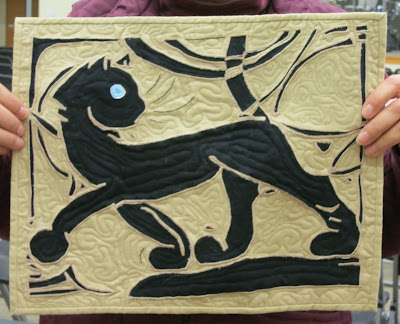 Modern elements: graphic use of stripes
Suggested changes: Since this is still only a quilt top, cut it apart and insert random strips of different colors of bright solids. 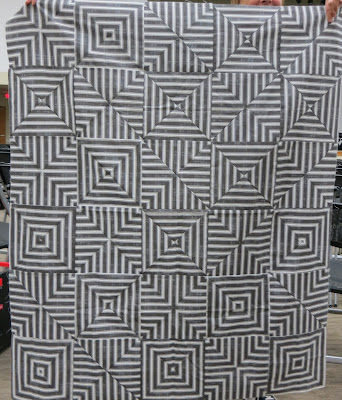 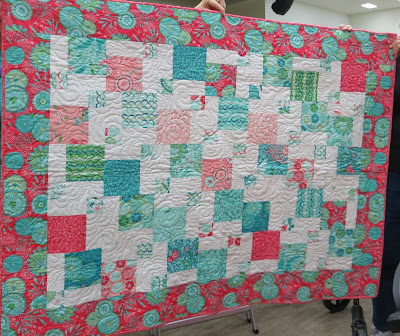 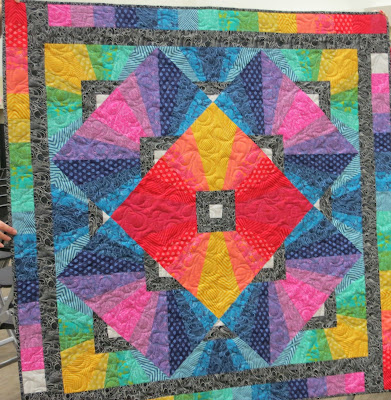 This was an engaging exercise for our chapter. We very much appreciate those members who were willing to share their work and accept a critique and comments. Thank you! It was a very educational program.

Our next meeting is Monday, February 5 (note change of date!) at North Lake Presbyterian Church in the Fellowship Hall (as usual). Our meeting begins at 6:30, and the program is being presented by Beth.

"Inspiration for Modern Quilt Designs"
Where do we get our ideas for making a unique modern quilt?
How do modern quilters come up with ideas?
Many examples will be offered that will help you launch your own design process.
No comments:

On Monday, January 8, 42 quilters interested in modern quilting attended our first meeting of the year. Six quilters were guests, and two quilters joined! 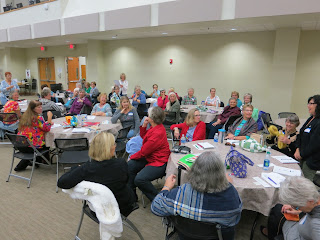 We revisited the chapter challenge quilts that were shared at the November meeting, with each person (who still had her quilt!) telling a little bit about her process of choosing a non-quilting magazine page - between pages 48 and 52 - and turning it into a modern quilt. You can view the 11 entries in our chapter challenge on a previous blog post, here. 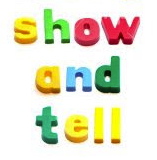 Note that names in parentheses are members' Instagram handles.

Beth's (Blue_Dragonfly5) two quilts are: (left) an entry in the Curated Quilts challenge, for possible publication in the CuratedQuilts magazine; and (right) another quilt made following the Interleave technique. Beth calls these "potato chip quilts" because she can't make just one! 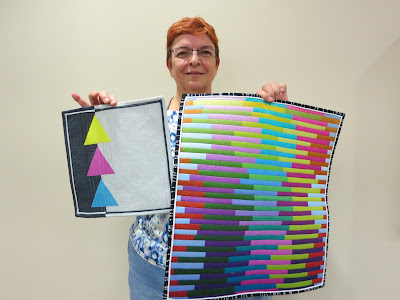 Mary's quilt uses the last of a number of Dresden blocks she made. 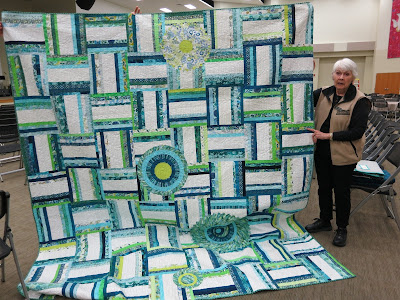 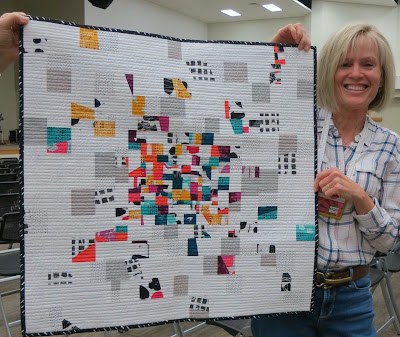 Jane (GrantHarpster) saw this design in a picture and translated it into fabric. We all think she should enter this in QuiltCon! 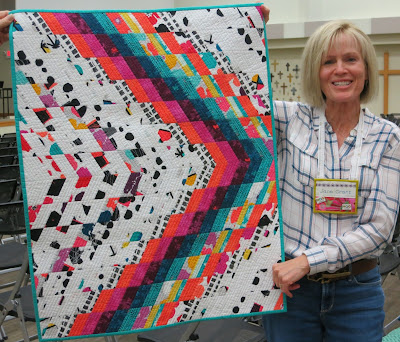 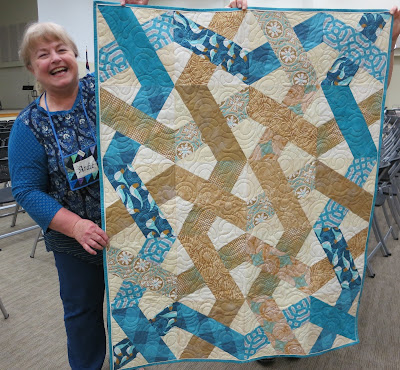 Diane (dbcfla) shared that she's been working on this block for three consecutive Christmases and decided it should be finished. 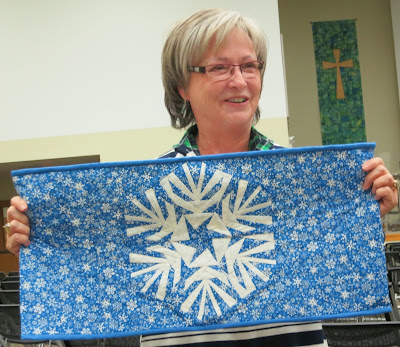 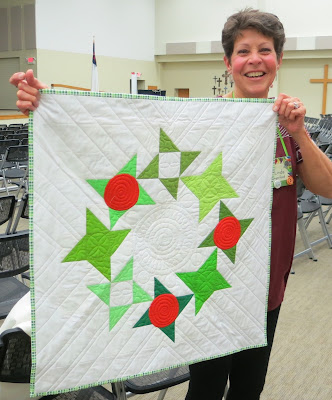 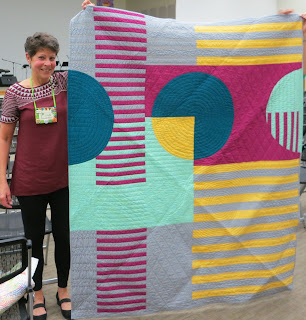 Linda (FlourishingPalms) made Rainbow Rounds, a foundation paper-pieced design found in Love Patchwork and Quilting magazine. She used homemade basting spray (find the recipe on this blog post) to sandwich the quilt for domestic machine quilting. 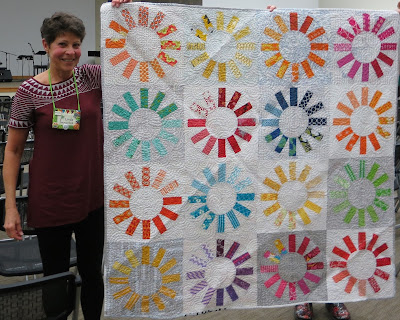 Karen (Yorkie3Mom) used a fabric pack and her own creativity to design this quilt. She domestic machine quilted it. 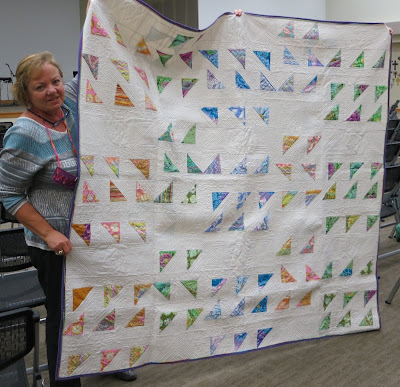 The last Show and Tell was made by five members of the Central Florida MQG - Karen E., Jane, Linda H., Linda T., and Frances - for the 2018 QuiltCon Charity Quilt Challenge. The color palette was chosen by MQG challenge coordinators; the theme is "Modern Traditionalism." Solid Painter's Palette fabrics were donated by Paintbrush Studios, and the Ocean Waves block was used to make the quilt which was designed in EQ7. White Pellon cotton batting was donated by Victoria Rondeau, and 50-weight Aurifil thread was donated by Aurifil.  Jane and Linda H. domestic machine quilted it. "Florida Waves" will appear at World Quilt Florida (January 18-20) in Orlando, in our group display called: "What Makes a Quilt Modern?" And in February it will be sent to Pasadena to be displayed at QuiltCon with all the charity challenge quilts.

The next blog post will be about the evening's program: Is This Modern?

We hope to see you at our first 2018 Sew-In this Saturday, January 13 at the Belleview Public Library! If you're interested in participating in our Instagram challenge and aren't sure about using Instagram, come to our Sew-In for assistance.

And don't forget... due to a scheduling conflict at the church, our February meeting is the first Monday - February 5.
1 comment: