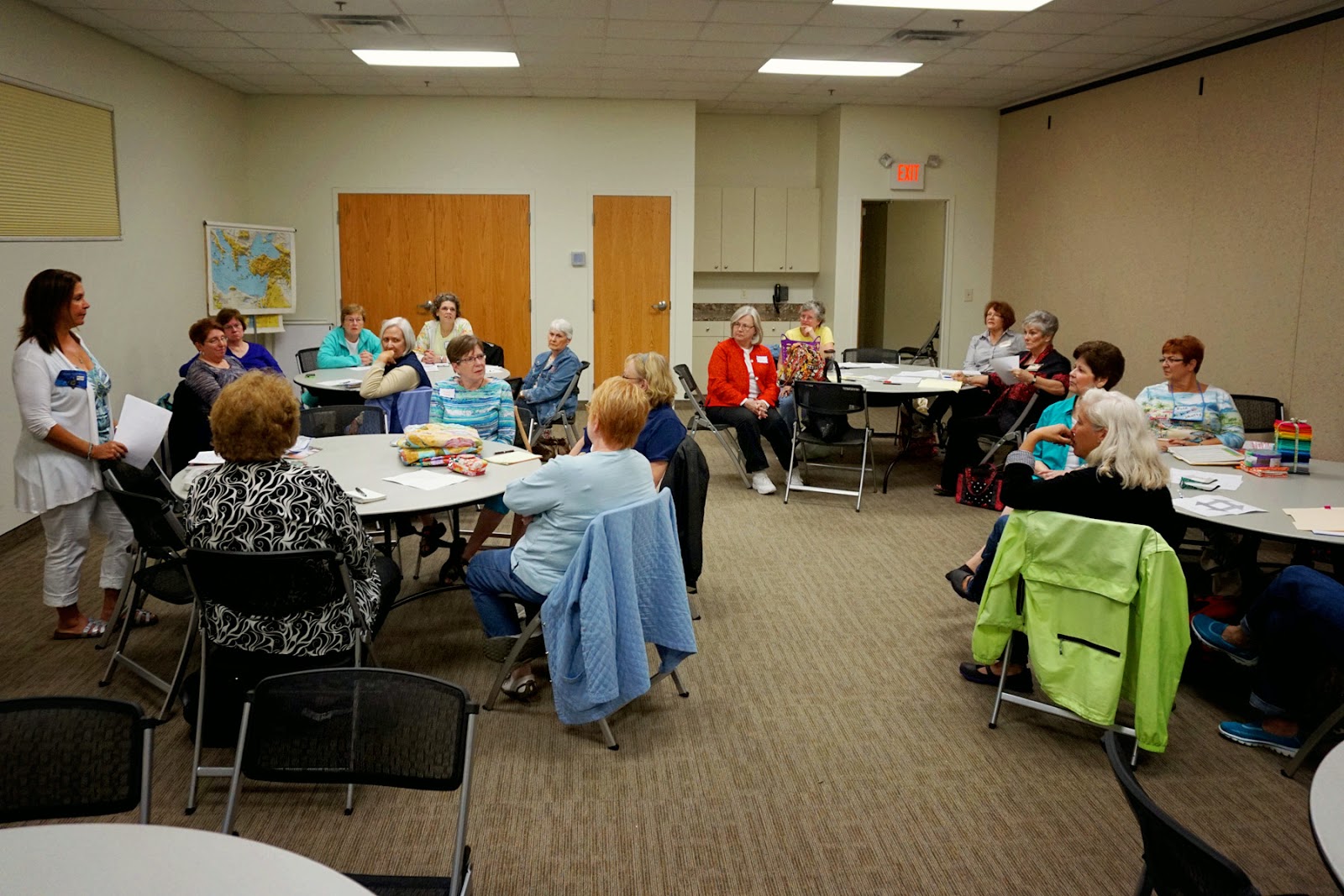 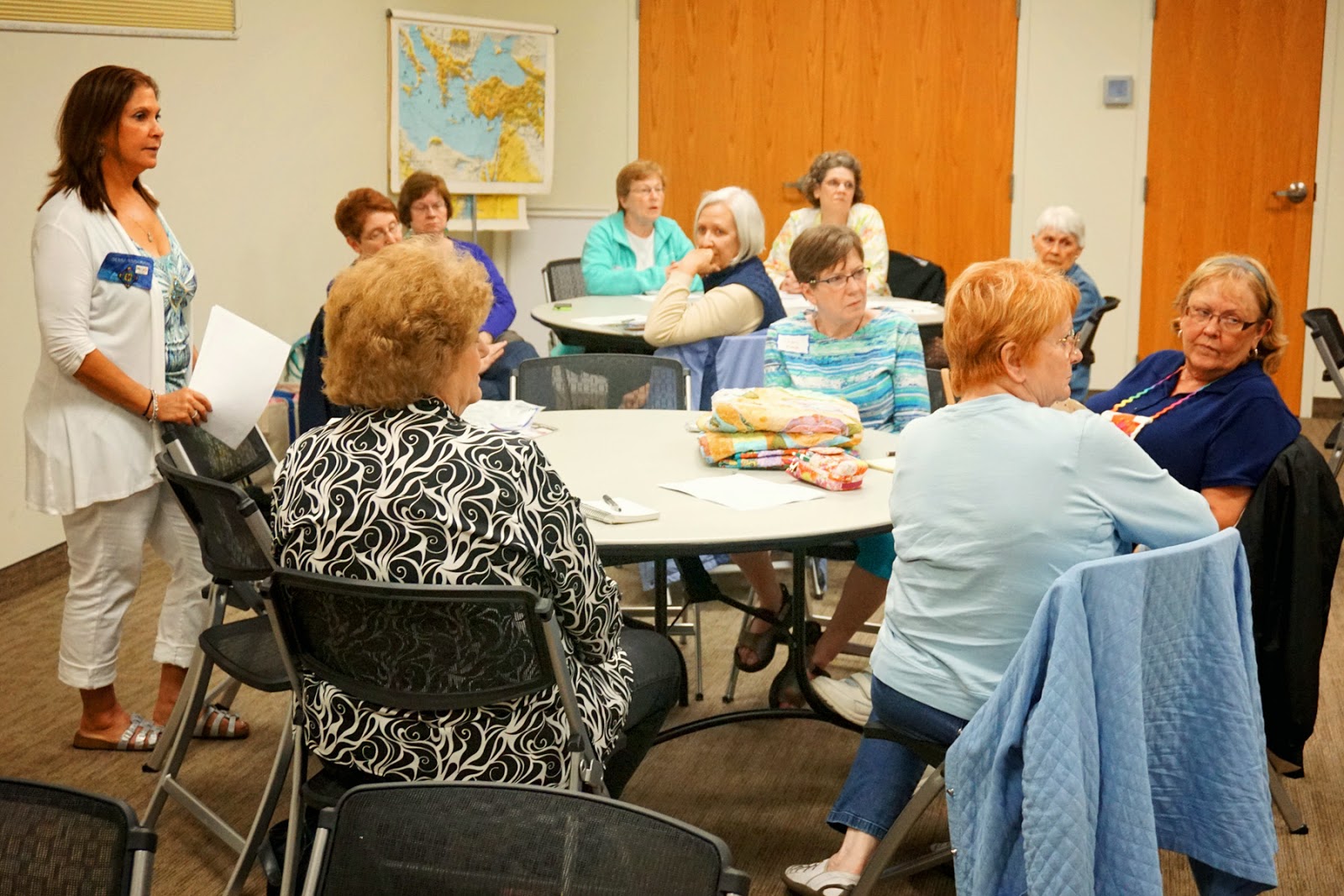 Based on the September, 2014 MQG Webinar - "Modern Quilting: Know it When You See It" - presented by Jacquie Gering, Debbie reviewed how a community of quilters is like a three-legged stool: traditional, art, and modern - none of which thrives without the other. 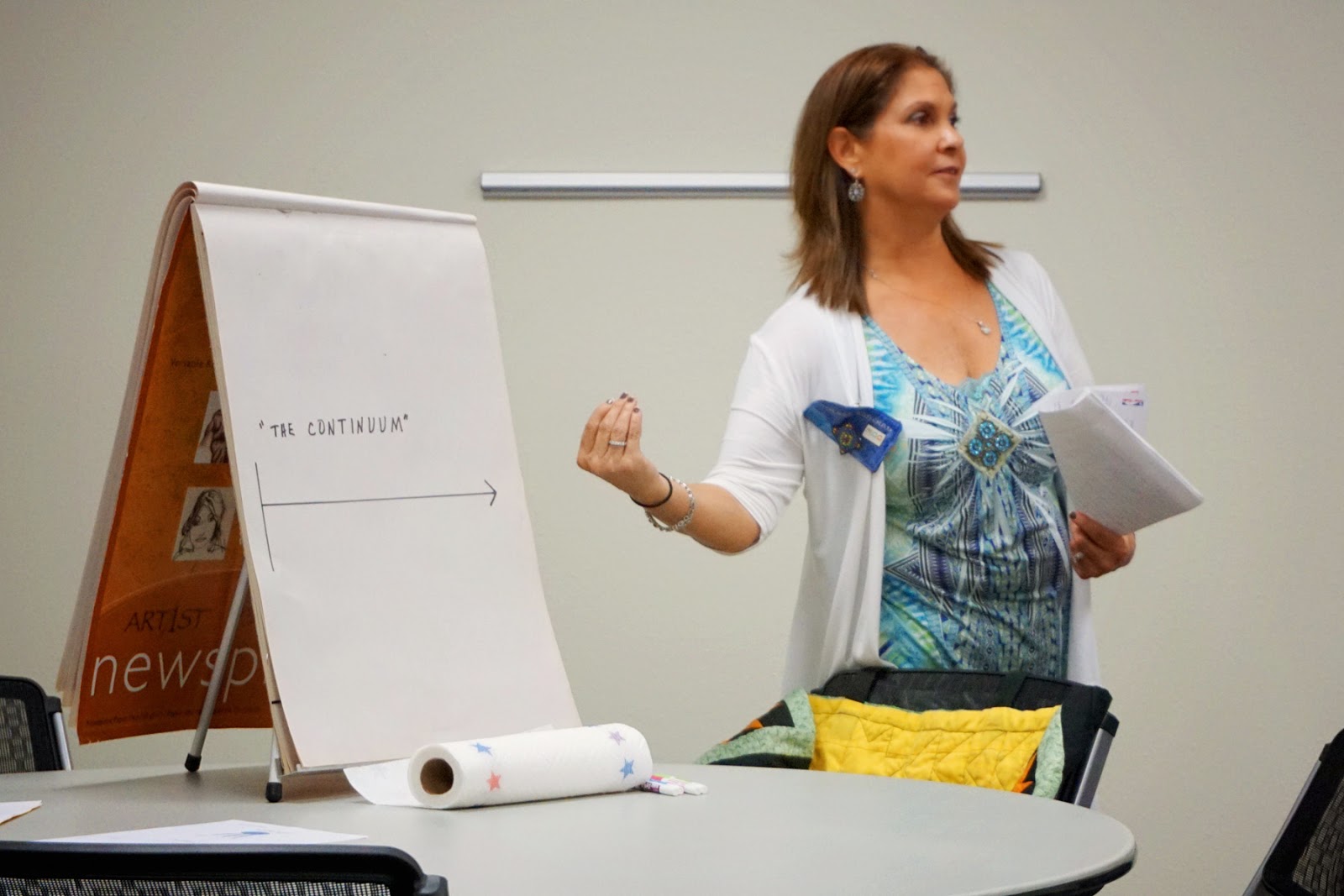 She also reviewed modern quilting elements, and then asked each of the 24 quilters present to indicate where they are on the quilting continuum... a long line from Traditional (on the left) to Modern (on the right) with each quilter's position marked by her initials on a yellow dot.

To see how quilters have moved from traditional toward modern, everyone was invited to show an older, more traditional quilt, and a more current, modern quilt.

These traditional quilts were shown. 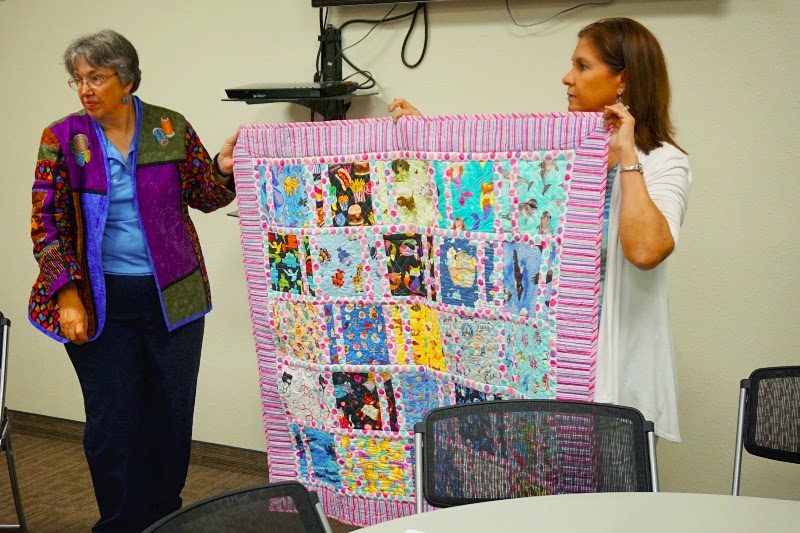 The following modern quilts were shown:

We're all looking forward to seeing how our chapters' members move their quiltmaking further toward modern.

Next Meeting
Monday, February 9, 6:30 p.m.
Program: How to Sew an Improvisational Block, by Linda H.
No comments:

On Tuesday, January 6, seven quilters representing the Central Florida Modern Quilt Guild, met at North Lake Presbyterian Church to present our group quilt to Kay Kennedy, leader of North Lake's women's group.
Karen explained to the women's group about our project - blocks made by about 20 quilters, and longarm quilted by Debbie - and that CFMQG appreciates using a church room for our monthly meetings. She then pulled the quilt from a gift bag... 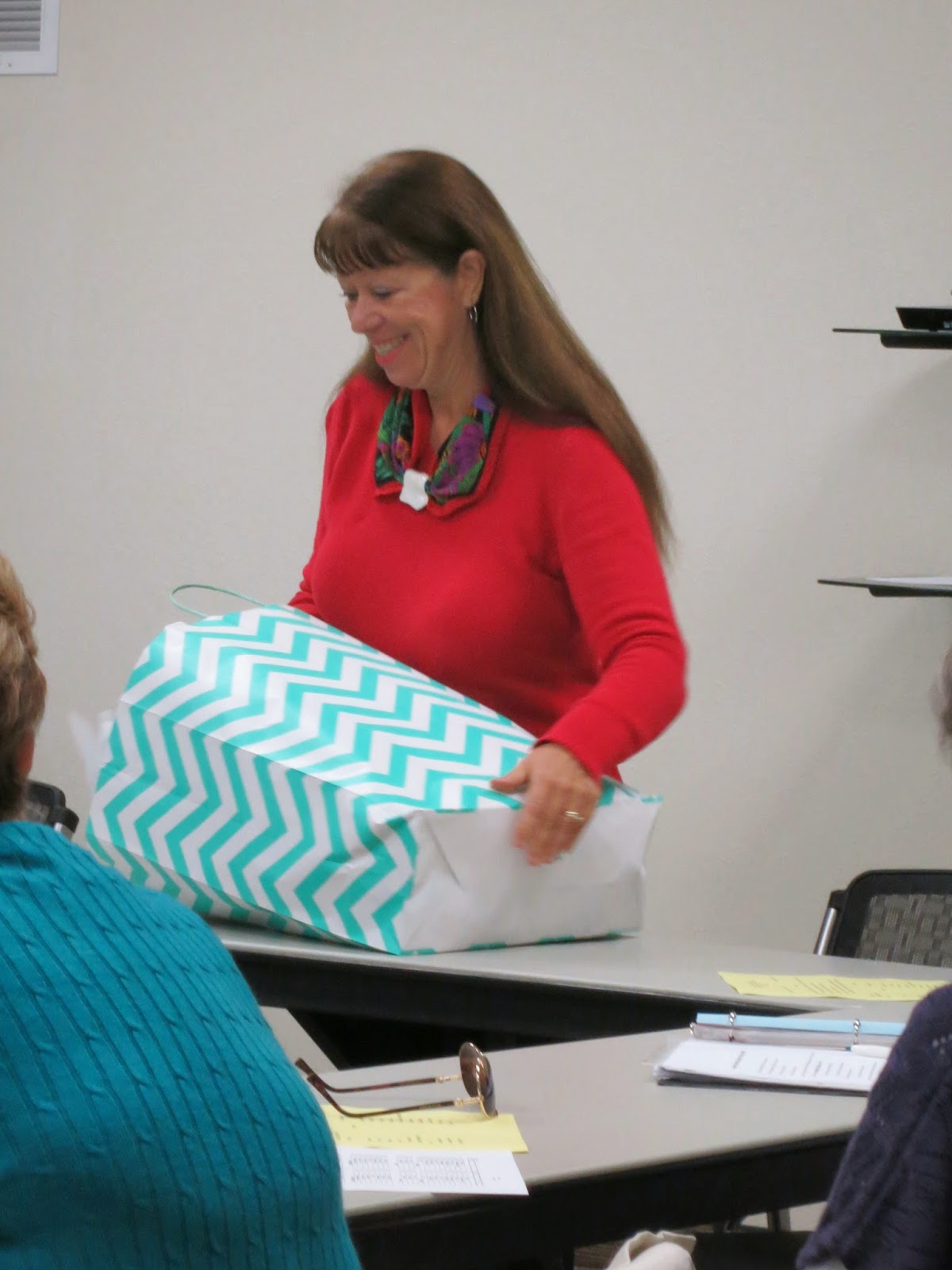 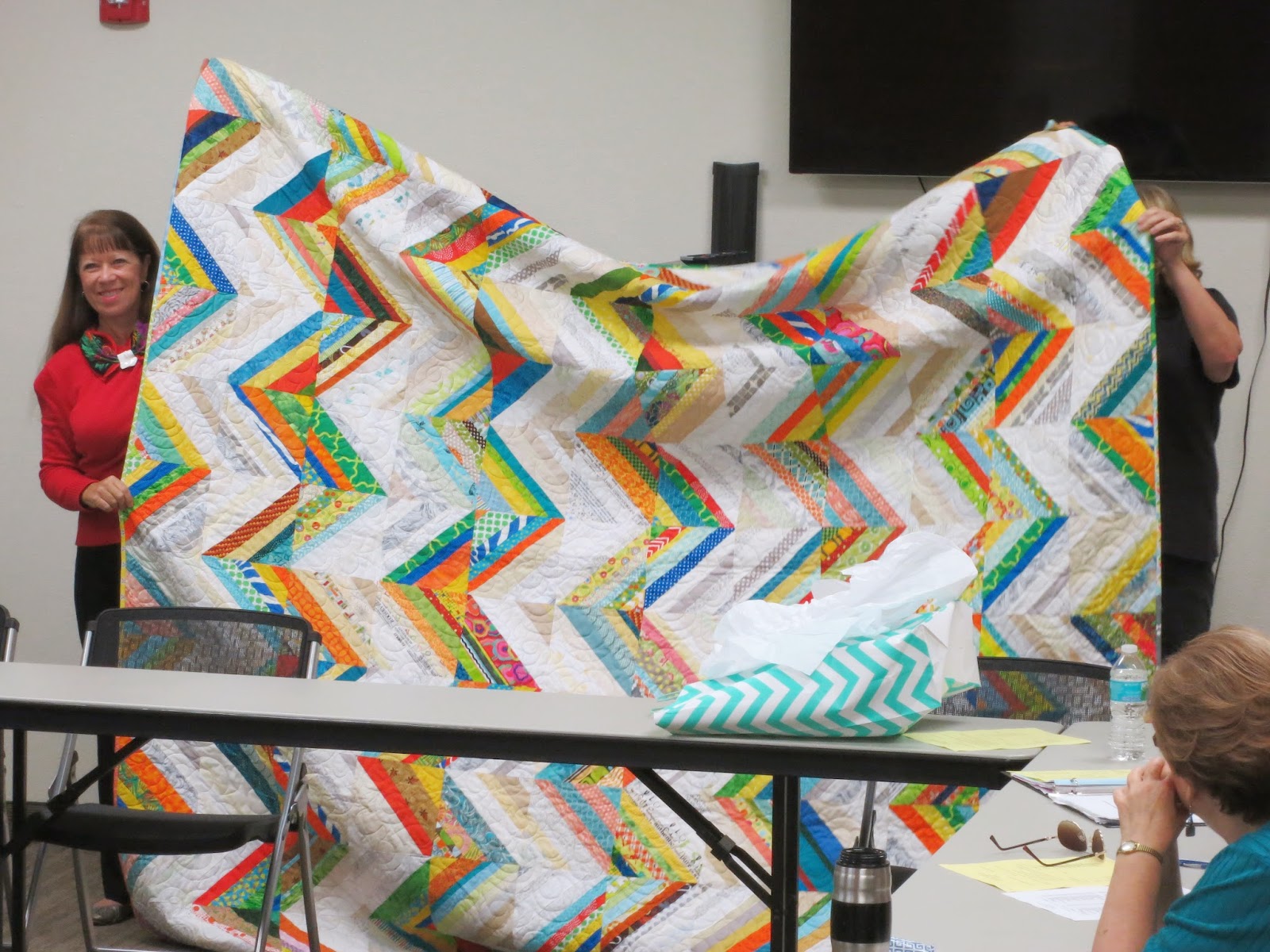 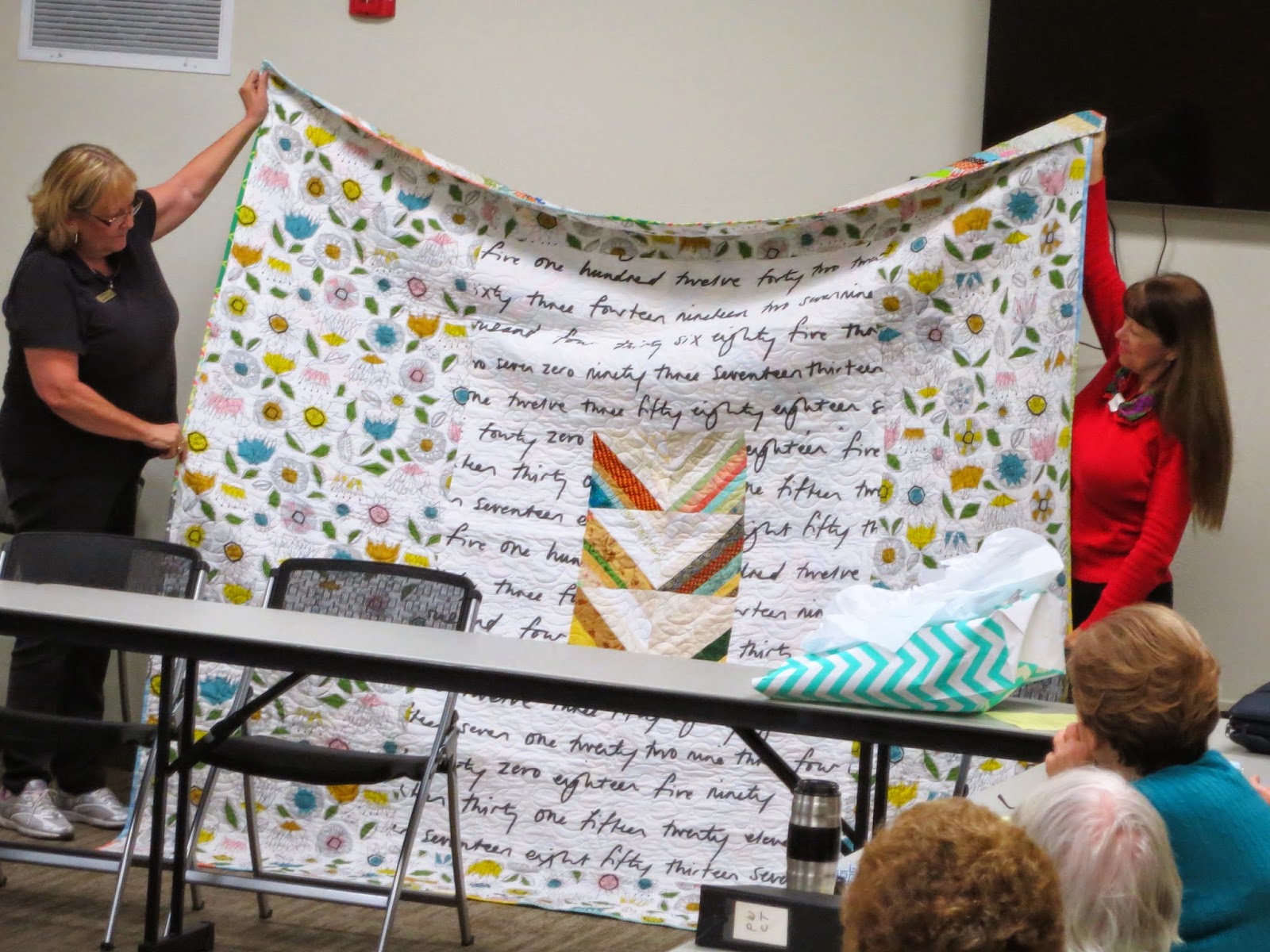 Emotions ran high as CFMQGers learned about the womens group's first upcoming Art Festival, and how this quilt will be raffled to raise funds to support North Lake's charitable giving.

Monday, January 12 begins an exciting new year for the Central Florida MQG! We have an entire complement of board members and committee chairs, and by the end of January or early February we'll officially be part of the national MQG.

On the agenda for Monday evening, beginning at 6:30 p.m:

Mark your calendars for 2015 meetings, all of which are on the second Monday of each month. Next meeting: Monday, February 9, 6:30 p.m. at North Lake Presbyterian Church.

Mark your calendars for 2015 Sew-Ins too, (see dates on right menu bar) all of which are at the Belleview Public Library and free to members. The next Sew-In is Saturday, February 28 from 10 am to 4 pm.
No comments:

On Tuesday, January 6, 2015, at 10 a.m., members of the Central Florida Modern Quilt Guild will meet at North Lake Presbyterian Church, 975 Rolling Acres Road, Lady Lake, to donate a quilt to the church.

The 87” X 97” quilt, made by Central Florida MQG members from assorted fabric scraps assembled by string-piecing, is being given to the church as a thank you for the group’s use of space for monthly meetings. 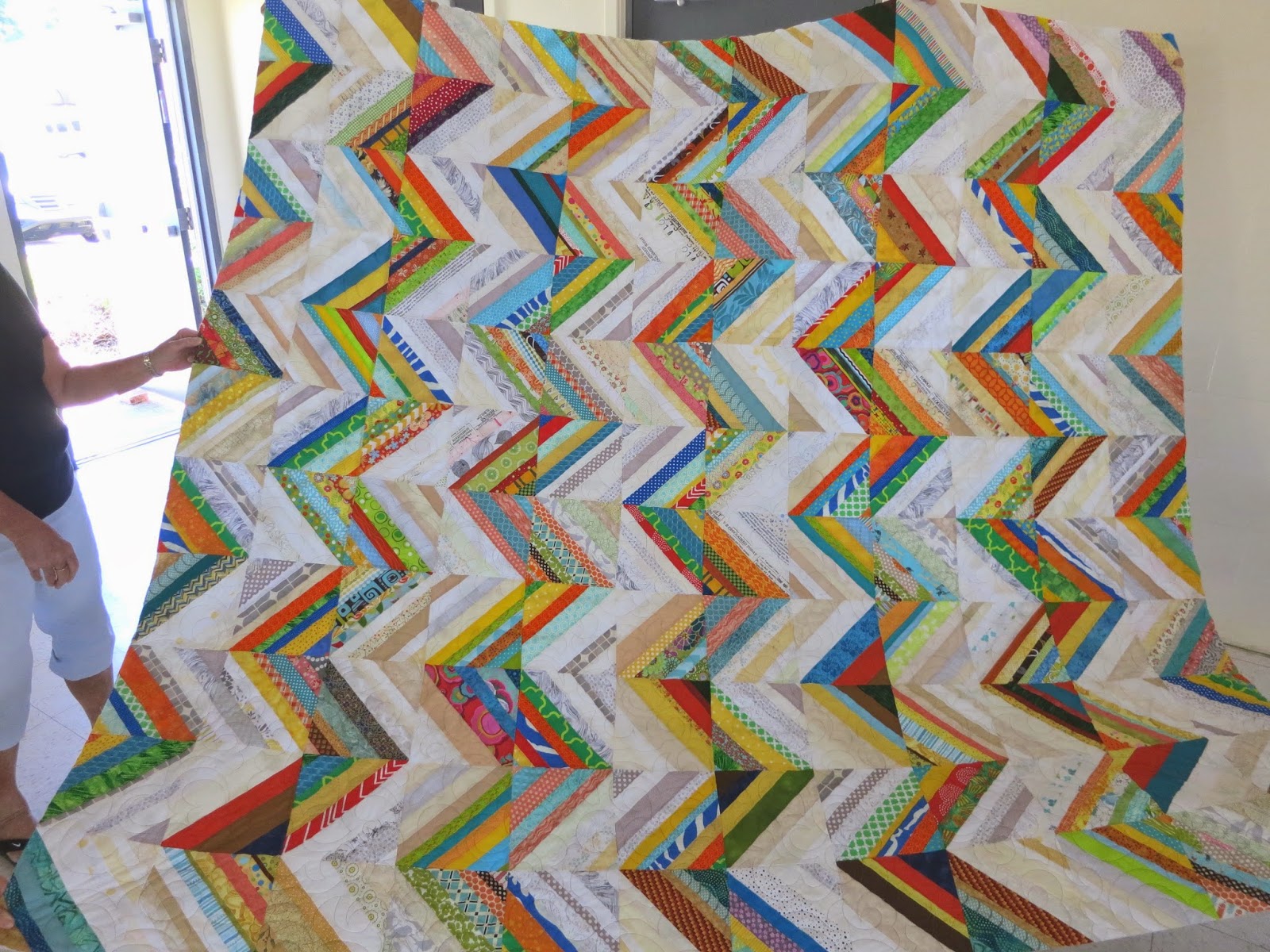 Women’s ministry moderator, Kay Kennedy, will accept the quilt on behalf of the church. All CFMQGers are invited to attend!
1 comment: